Skip to content
Kamakhya Devi temple is a famous pilgrimage situated at Guwahati, Assam. The temple is located on the Nilachal hill in Guwahati at about 8 kms from the railway station.
The Kamakhya Devi temple is dedicated to the tantric goddesses. Apart from the deity Kamakhya Devi, compound of the temple houses 10 other avatars of Kali namely Dhumavati, Matangi, Bagola, Tara, Kamala, Bhairavi, Chinnamasta, Bhuvaneshwari and Tripuara Sundari.

The temple of Kamakhya has a very interesting story of its origin. It is one of the 108 Shakti peeths. The story of the Shakti peeths goes like this; once Sati fought with her husband Shiva to attend her father’s great yagna.
At the grand yagna, Sati’s father Daksha insulted her husband. Sati was angered and in her shame, she jumped into the fire and killed herself. When Shiva came to know that his beloved wife had committed suicide, he went insane with rage. He placed Sati’s dead body on his shoulders and did the tandav or dance of destruction.
To calm him down, Vishnu cut the dead body with his chakra. The 108 places where Sati’s body parts fell are called Shakti peeths. Kamakhya Devi temple is special because Sati’s womb and vagina fell here.

The God of love, Kamadeva had lost his virility due to a curse. He sought out the Shakti’s womb and genitals and was freed from the curse. This is where ‘love’ gained his potency and thus, the deity ‘Kamakhya’ devi was installed and worshipped here.
Some people also believe that the Kamakhya Devi temple is a place where Shiva and devi Sati had their romantic encounters. As the Sanskrit word for lovemaking is ‘kama’, the place was named Kamakhya.

Kamakhya devi is famous as the bleeding goddess. The mythical womb and vagina of Shakti are supposedly installed in the ‘Garvagriha’ or sanctum of the temple.
In the month of Ashaad (June), the goddess bleeds or menstruates. At this time, the Brahmaputra river near Kamakhya turns red. The temple then remains closed for 3 days and holy water is distributed among the devotees of Kamakhya devi.
There is no scientific proof that the blood actually turns the river red. Some people say that the priests pour vermilion into the waters. But symbolically, menstruation is the symbol of a woman’s creativity and power to give birth. So, the deity and temple of Kamakhya celebrates this ‘shakti’ or power within every woman.

The Kamakhya Devi Temple is a Hindu temple, situated in Assam, dedicated to the Goddess Kamakhya Mata, one of the oldest shakti peeths.
There are many unheard and true tales about the temple, today we have come up to tell you the hidden secrets of Kamakhya Devi temple you might have never heard of. 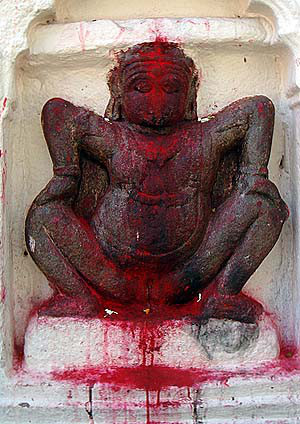 It is said that Devi Sati married to Lord Shiva against the wish of her father, king Daksha. Once king Daksha was organizing a yagna, but he didn’t invite Devi Sati and her Husband lord Shiva.
Sati became very upset knowing that, but she still went with her husband to her father’s palace. When she reached at her father’s home, he insulted her and Lord Shiva.
Sati couldn’t bear this disrespect for her husband, so she jumped off in the fire of Yagna and killed herself.
When Lord Shiva got to know about this incident, he got very furious. Disgruntled Shiva holding the dead body of Sati in his arms started Tandav, the dance of destruction of the universe.
Then, Lord Vishu came up to save the universe; he cut the body of Sati into pieces with his weapon called Sudarshan chakra. Different parts of Sati fell at different places these places are known as shakti peeths in India
In Kamakhya Devi temple the Vagina or yoni of the Goddess fell, so the scripture or image of Yoni is found in the Kamakhya Devi temple, there is water all around this scripture or image of yoni.
There was a demon called Naraka who fell in love with Goddess Kamakhya because she was divinely beautiful and wanted to marry her.
Goddess put a condition before the demon that if he could build a staircase from the bottom of the Nilanchal Hill to the entrance of the temple within one night, then she would defiantely marries him.
Naraka accepted this challenge and tried all with his might and effort to do this daunting and seeming unachievable task. He was almost about to complete the job, right then Devi got panic-stricken seeing the demon work, so she played a trick on him.
Devi strangled a cock and made it voice like crow to give the untimely impression of dawn to Naraka. Deceived by the trick of Devi, Naraka thought it was a vain job and left his work half way through.
Later he somehow came to know it and chased the cock and killed it in a place, the place is now known as Kukurakata, situated in Darrang District in Assam. The incomplete staircase today is known as Mekhelauja path.
Apart from the daily puja offered to Kamakhya Devi, many types of special pujas are also offered round the year in Kamakhya Devi temple. These pujas are known as follow:
Durga Puja: Durga Puja is celebrated every year during the month of September-October, also known as “Navratri”.
Ambubachi Puja: This is also an annually celebrated fertility festival of Maa Kamakhya Devi. It is assumed that the Goddess experience menstrual during the period and the temple remains closed for 3 days and then opened with great festivity on fourth day called Ambubachi Mela.
Pohan Biya: This festival is celebrated as symbolic marriage between Lord Kamesvara and Kamesvari Devi during the Hindi month of Pausha during December-January.
Vasanti Puja: Vasanti puja is carried out at Kamakhya Devi temple in the Hindi month of Chaitra or during March-April.
Manasha Puja: This Puja is performed from Sankranti and continues up to the second day of Bhadrapad.

The temple additionally has a yearly fruitfulness celebration called Ambuwasi Puja in which the goddess is said to experience her yearly menstrual cycle.
The temple stays shut for three days and opens up with incredible celebrations on Day 4. It is additionally said that the waterway Brahmaputra turns red amid this time. Whether it truly is blood, or vermilion put by pandits is an inquiry left unanswered.
This is the thing that shows the temple about the draining goddess and the Temple stays close. Later, the blessed water is dispersed among the aficionados.
Ironicly individuals visit the temple and some even claim that it is the most propitious spot in the nation, yet discussions still transform into whispers when we transparently discuss monthly cycle!

How to reach Kamakhya Devi temple

Kamakhya devi temple is situated in Guwahati , the capital of Assam and the most prominent city in entire North -East .So it is easy to reach Kamakhya Devi temple .
Air route to Kamakhya Devi temple: Nearest airport is Lokpriya Gopinath Bordoloi Airport Guwahati .
By Rail: Nearest Rail Station is Kamakhya .
By Road: Buses and metered taxis ply from Guwahati city .