Skip to content
Rameshwaram Temple is situated in the island of Rameswaram, off the Sethu coast of Tamil Nadu and is reached via the Pamban Bridge across the sea.
The huge temple is known for its long ornate corridors, towers and 36 theerthams.
Rameshwaram Jyotirlinga represents the southernmost of the 12 Jyotirlingams of India and has been a time honored pilgrimage center held on par with Banaras.
Rameshwaram Temple Jyotirlinga is associated closely with the Ramayana and Rama′s victorious return from Sri Lanka.

According to a popular legend, it was Lord Rama who installed this Linga here. Story goes that when Lord Ram was on his way to attack Ravana, he reached this place where he made a linga of sand and worshipped it.
It is said that when Lord Rama was drinking water on the seashore there was a celestial proclamation – “You are drinking water without worshipping me”.
Listening to this Lord Rama made a linga of sand and worshipped it and asked to be blessed so that he could vanquish Ravana. Lord Shiva blessed him accordingly.
He also requested Lord Shiva to reside eternally here so that entire mankind should benefit from it. Shiva then manifested himself as the Linga and got installed there for eternity.
According to yet another story, while returning to Ayodhya, Ram worshipped Lord Shiva in the form of a Shiva Lingam made of earth by Sita.
It is said that Hanuman was entrusted with the task of bringing an image of Viswanathar from Banaras.
Anticipating delay in Hanuman′s return from Benares, Rama offered worship to a Shivalingam at a pre-chosen auspicious moment.
This lingam is referred to as Ramalingam and the town is known as Rameswaram.
There is yet another Shivalingam here – Viswanathar said to have been brought by Hanuman from Banares.
This Shivalingam is referred to as Kasilingam and Hanumalingam. Prayers are offered to Viswanathar before they are offered to Ramanathaswamy.

Rameswaram Temple is spread over an area of 15 acres and has lofty gopurams, massive walls and a colossal Nandi.
Rameswaram Jyotirlinga also boasts of a 4000 feet long pillared corridor with over 4000 pillars, supposedly the longest in the world.
The carved granite pillars are mounted on a raised platform. Worth noticing fact about this corridor is that the rock is not indigenous to the island and is said to have been brought in from elsewhere in Tamil Nadu across the sea.
The eastern Rajagopuram towers to a height of 126 feet and has nine levels. The Western Rajagopuram is also quite impressive though not as tall as the Eastern one.
The temple also has several mandapams with mini shrines to other deities. There is a huge Nandi measuring 12 feet in length and 9 feet in height with the idols of Viswanatha Naicker and Krishnama Naicker.
The lingams are housed in the inner section of the Ramalingeshwara. High walls enclose the temple, forming a rectangle with huge pyramidal gopura entrances on each side.

Significance of Rameshwaram Temple Jyotirlinga has been described through a shloka in Manas:
Je rameshwar darshan kari hahi |
Te tanu taji mam loka sidaari hahi ||
Meaning: Those who go to Rameshwar and seeks my blessings, shall always reside in Shivloka.
It is said that there is greatness associated with the ceremonial bath given to the linga by water of the Ganga.

Situated on Pamban Island, which is set at the tip of the Indian promontory, Rameswaram is isolated from territory India.
The town is a verifiable city which was ruled by the different southern Indian administrations and has been specified in the fanciful Hindu epic, Ramayana.
Rameswaram, in the condition of Tamil Nadu is additionally a part of the sacred Hindu journey of the Char Dhams.
Rameswaram is additionally a noteworthy pioneer spot for the Shaivaites and the Vaishnavites. Here’s the rundown of the best places you can visit in Rameshawaram.
Noted among the 275 most important Shiva temples for the Shaivaite sect of Hindus, the Sri Ramanathaswamy Temple is a part of the Char Dham pilgrimage of the Hindus.
The temple was said to have been established by Lord Ram himself and is built in the Dravidian style of architecture.
The site of the temple was expanded by the Pandya kings in the 12th century who are responsible for the current structure of the temple.

The sandy shores of Rameswaram are one of the most holy places for the Hindu pilgrims.
The Agnitheertham, are a collection of 22 such spots at the shores which the pilgrims bath in. according to Hindu mythology Lord Ram took a bath at the shores to absolve him from the sin of the killings in the war against Ravana.

The hillock lies at a short distance of 3 kilometers from Rameswaram and is the highest point on the island. Gandamadana Parvatham is considered to house a foot print of Lord Rama on a Chakra.
The hill lies at an amazing location and one can get the panoramic views of the entire island from this point.

The Temple  is popular for its novel incarnation of the relentless monkey god Lord Hanuman.
The picture of the god has five faces in particular Lord Hanuman, Lord Adivaraha, Lord Narasimha, Lord Hayagriva and Lord Garuda.
The symbol is cut from a huge senthooram stone from which vermilion is determined.
The antiquated symbols of Lord Ram, Sita and Lakshamana that were brought amid a violent wind from Dhanushkodi are likewise set here. 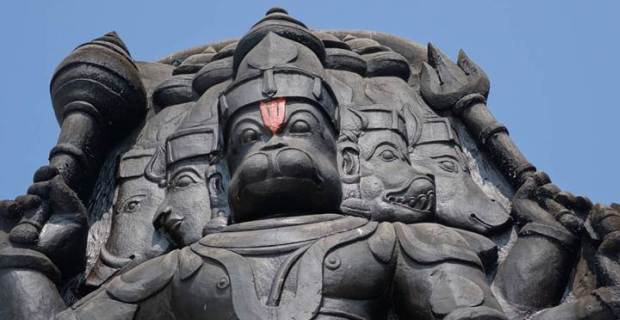 An acclaimed excursion spot on the island, Dhanushkodi is likewise an essential traveler spot on the Rameswaram Island.
The name Dhanushkodi truly implies the end of the bow and is spot where Lord Ram manufactured the acclaimed span with gliding stones.
The spot is well known for the different transitory flying creatures that rush here and its perfect perspectives of the sea.
Being a standout amongst the most critical traveler spots for the Hindus, Rameswaram is a city that epitomizes the wealth of Indian society and the Hindu religion.
The previously mentioned spots are the most frequented and well known spots that one ought not miss on their outing to Rameswaram.

Don’t Miss the Saptika Linga – The Spatika Linga Darshan is a very important part of the Rameshwaram temple and it shouldn’t be missed.
The darshan is only available from 5am to 6am, and devotees usually stand in a queue from 4am. A special ticket of ₨. 50 is required to do the darshan.
One can also go to the general queue which charges ₨.10. After the darshan, breakfast can be done from the nearby mess, which serves dosas and idlis.
Performing the Rituals – In order to collect sand from the sea, it is imperative that a purohita is hired, who will perform the rites and rituals required in order to collect sand. After 36 dips in the sea one can collect the sand from the sea.
There are 23 theerthams within the temple and one must bathe in each of these theerthams after collecting the sand from the sea.
It takes around ₨. 25 to complete this ritual, but it is advisable to carry some extra cash up to ₨.75.
After this, one can go for the main worship in the temple. The basic Pooja starts from ₨.111 and the purohitacan take around ₨. 500-600 for his services throughout the four stages.
Other Nearby Attractions – Other places to visit while visiting the Rameshwaram temple include the ‘Ramar Patham’ where autos ply almost throughout the day from the Rameshwaram temple.
The Kothandaraswamy Temple, located almost 15 km away from Rameshwaram temple, is believed to be the place where Bibhishan surrendered to Rama, and was made the King of Lanka immediately after.
Lakshmana performed the rites using the sacred water from the sea. Therefore, this temple too has a religious significance to the Hindus.

How To Reach to Rameshwaram Temple Tamilnadu

You can easily get regular trains to Rameshwaram from other major cities of the country.

There are regular buses from other major cities of the country to Rameshwaram.