On the banks of river Kshipra, the city of Ujjain exists in Madhya Pradesh. It is also known as Indrapuri Amaravati, and Avantika. Because of the number of golden towers of several temples, this town is also known as “Swarna Sringa.”

One of the seven cities of deliverance or salvation, Avantika Nagar has 7 Sagar Teerthas, 28 teerthas, 84 SiddhaLingas, 25-30 SivaLingas, Ashtabhairav, Ekadasa Rudrasthana, temples for hundreds of deities, Jalakund and monuments are there.

The Mahakaleshwar Jyotirlinga temple is a three-storey temple. You can find the lingams of Mahakalesvara, Omkaresvara and Nagachandresvara installed in the lowest, middle and the uppermost part respectively.

The pilgrims and tourists get to see the glance of Nagachandresvara on the celebratory of Naga Panchami.

A large-sized Kunda known as Koti Tirtha is also found in the temple. It’s constructed in the sarvatobhadra manner.

The Kunda as well as its water are considered as celestial. While gpping up the stairs, you can notice many images representing the sculptural magnificence of this temple built which is said to have been built the Paramara period.

There is a large Veranda to the east of Kunda, this path is said to lead to the garbhagrha. To the north is a cell that holds the images of Lord Rama and goddess Avantika.

There are many Saivite temples in the south side of it. The temple of Vrddha Mahakalesvara, Saptarshi and Anadi Kalpesvara are famous and amazing pieces of architecture.

The existing temple of Mahakala was constructed in the 4th – 5th decades of 18th century. At the same time, the religious nobles of the Maratha community too built a lot of temples in the same complex.
This period also saw the revival of many primeval traditions like worship, arati, sawari (procession) in month of Sravana month, abhisheka, Harihara-milana etc.
These are still carried out with wonderful ceremony and devotional fervor. The Bhasmarti conducted early morning, Mahasivaratri, Somavati Amavasya etc. are unique religious junctures interwoven with the temple rituals.
The Mahakaleshwar Jyotirlinga temple is renovated during the Kumbha Parva. In 1992, Madhya Pradesh Government and the Ujjain Development Authority contributed unique repairs and made necessities for the stay of the pilgrims. The same would be done for the forthcoming Simhastha too.
Most of the prehistoric Mahakaleshwar Jyotirlinga temples find their origins spun around the outmoded legendary tales. Mahakaleshwar Temple too shares a similar history.
Legend states that when this city was governed by King Chandrasen, a passionate follower of Lord Shiva, a young boy known as Shrikhar was highly moved by his dedication.
He wished to be part of the King’s prayers but was turned down by the Royal cavalry. He was sent away to the outer edge of the city, near Kshipra river.
As Shrikhar strolled into the countryside, he eavesdropped to the neighboring kings discussing a plot to rob Ujjain.
At this instance, Shrikhar began praying to Shiva. Slowly, the word spread across the town and all came to know of the forthcoming attacks. A local priest, Vridhi, went into Kshipra and began chanting the Lord’s name.
In the meantime, the rivals with the aid of a demon known as Dushan successfully plundered the city and killed countless Lord Shiva’s devotees.
This made Lord Shiva to appear and destroy King Chandrasen’s enemies. After request from Shrikhar and Vridh, Lord agreed to dwell in the city as a “lingam” and protect its people from any suffering.
The structure in the region of the temple was built by different ruling kings. However, a part of it was shattered by Sultan Iltutmish, when he attacked the city during 1234 to 1235.
In the 19th century, the Scindia Royal family took over the accountability of its restoration.
Bhasm-Aarti is a prime attention seeking event here. It starts prior to the break dawn to wake up the divinity. It takes place just once in a day on a daily basis.
The ceremony consists of the worshipping the idol with sacred ash brought from the ‘ghats’. It’s applied on the ‘lingam’ before conducting the holy prayers.
The controlling divinity of time, Shiva, in all his magnificence reigns everlasting in Ujjain. Mahakaleshwar’s temple, its shikhara towering into the sky, evokes primeval admiration and respect with its splendor.
The Mahakal rules the life of the people here. Despite the demanding schedule of modern preoccupations, it offers an indestructible link with the past traditions.
As per the scriptures, the universe has three regions namely the sky, earth and nether. Mahakal is the Lord of earth. Of all the 12 Jyotirlingas, it’s just the Mahakal which is called the Lord of earth as well as death.
Ved Vyas has sung the glory of Mahakala in the epic Mahabharat and so have other poets such as Kalidas, Bhoja and Banbhatt.
The Mahakaleshwar Jyotirlinga temple got renovated at the times of Parmar regime in 11th century. In the year 1234, Sultan Iltutmish of Delhi, made an attack on Ujjain and knocked down the Mahakal temple.
The current Mahakaleshwar Jyotirlinga temple is situated near a lake set upon a roomy courtyard surrounded by gigantic walls. It has a total of five levels, with one being underground.
Mahakaleshwar Jyotirlinga is located below the ground level (Garbhagriha). Mahakaleshwar’s idol is said to be dakshinamurti, i.e. facing the south.
This is a distinctive characteristic endorsed by the tantric traditions. Owing to these thoughts, Mahakal’s worship with vedic mantras stands rewarding for the supporters.
All the devotees desire to be a part of the Bhasma Arti in Mahakaleshwar Jyotirlinga temple. Mahakal and Bhasma Arti are identical with each other. Mahakaleshwar is the sole Jyotirlinga temple, where this arti is performed.

The Adyapeetha i.e., is the foundation of Sanskrit learning, ethics, knowledge or science and art had their initiation at this place.
It is indeed the Triveni Sangam or learning of the three great things. The greatness of Ujjain city was enhanced by the Maurya kings as well as other dynasties.
The great emperor Vikramaditya who began new era by starting a new way of counting the years, made Ujjain his capital.
It is here that Raja Bhartrihari wrote his great epics (love stories) Virat Katha, neeti Sataka, the love story of Pradyot Princess Vasavadatta and Udayan.
The beauty of this city found a pride of place in the descriptions of a great many poets and writers who song its praise. At the auspicious time at dawn, the women of this town sprinkled vermillion water in their courtyards and decorated them with Rangoli designs.
In the Mahakal Shiv temple located in Ujjain on the banks of River Kshipra, at 4 AM puja is performed. After Abhishek, Chitabhasm (Ash of cemetery) is applied all over Mahakal.
According to classics, Chitabhasm (human ash) is considered as unholy and inauspicious. If any one even touches it by mistake, one is required to bathe in order to be purified.
But this very ash becomes holy, by merely touching the body of Mahakal, because Siva is Nishkam or lust-less.
He is not touched by material desires. That is why Shiva is Mangalmay or auspicious.

The first thing you hear when you tell locals that you’re planning to visit the Mahakaleshwar temple is that you must ensure you attend the “Bhasm-Aarti”.
The Bhasm-Aarti is the first ritual conducted everyday at the temple. It’s performed to wake the god (Lord Shiva) up, do “Shringar” (anoint and dress him for the day), and carry out the first aarti (an offering of fire to the deity by circulating lamps, incense and other items).
The unique thing about this aarti is the inclusion of “Bhasm”, or ash from funeral pyres, as one of the offerings. Mahakaleshwar is a name for Lord Shiva, and means the god of Time or Death.
This may be one of the reasons of the inclusion of the funeral ash. You will be assured that this aarti is something that you shouldn’t miss, and that until fresh ash is not brought in the aarti cannot start. 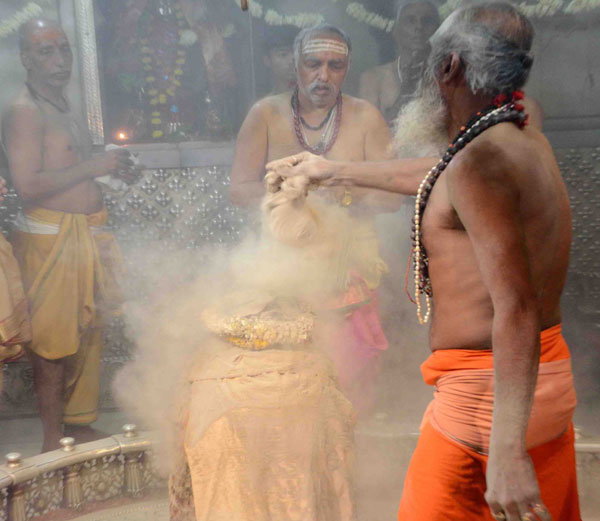 How To Reach Mahakaleshwar Jyotirlinga Ujjain

Mahakaleshwar temple is located in Ujjain town of Madhya Pradesh. Ujjain is very well linked with Indore city and can be reached easily by road and train. Accessibility information is given below:

By Train : Ujjain railway station connects the city of Ujjian with the neighboring cities. Devi Ahilyabai Holkar Airport in Indore is the nearest airport to the city of Ujjain. Passengers can easily get to Airport by buses as it is only 55 km away from the main city of Ujjain.

By Air: Ujjain don’t have its own Airport, Ahilya-devi airport in Indore, is the nearer one which is about 60 km from city Ujjain, this airport has wide domestic & international air connectivity; there are frequent flights for national capital Delhi, Mumbai & other major cities of India.

Though one can visit this eternal place of Grand Lord Shiva, at any time throughout the year, as thousands of devotees comes here everyday, but during the festive time and that too in Grand-Night of Shiva called Maha-shivaratri, which comes during February to March, brings a lofty numbers of visitors from around the globe, and so this can be the best time to explore the real divine charm of the city.