This holy cave is nearly a kilometer long and houses a 4 ft high, naturally formed ‘Shivling’. It is considered second only to the shrine of Mata Vaishno Devi in religious importance.

There are stalactites and stalagmites dripping milky limestone water. Shri Shiv Khori cave is situated nearly 4.0 kms from Ransoo the base camp of the shrine, located in District Reasi.

The road distance from Jammu to Ransoo-via Katra (Shri Mata Vaishno Devi) is 129 kms & via Akhnoor – Bhambla, it is 112 kms and 57 Kms from Distt. Reasi.

The entrance of this cave is very wide but it narrows to some extent towards the middle of the cave. The cave is in fact in the shape of Lord Shiva’s Damroo i.e. wide at the two ends while very congested at the center.

The place hosts a major fair on Shivratri. There are stories of sadhus who tried this way to Amaranth but did not return and therefore this particular path has since been closed.

One has to literally crawl to the other passage by stooping or twisting his body to get to the sanctum sanctorum to where this lingam lies.

To the left of Shivling Mata Parvati is symbolized by impression of Her Holy feet. Kartikeya is also seen in left of Shivlingam. At nearly 2.5 feet above, five headed Ganesha is can be seen.

The Holy cave has a number of other natural images which are believed to be that of 33 crores Hindu Deities.

The cave roof is etched with snake like formations, the water trickles through these in the cave.

‘Three pronged lance’ depicting the Trident (Trishul) of Lord Shiva and ‘Six Mouthed Sheshnaga’ are also seen on the roof of the cave.

The main portion of cave roof has round cutting mark signifying construction of cave by Sudarshan Chakra of Lord Vishnu.

As per history, about 100 years ago, a Muslim shepherd is said to have discovered this historic cave. It is said that when a goat went missing from his herd, he shepherd came to this cave accidentally searching for his goat. 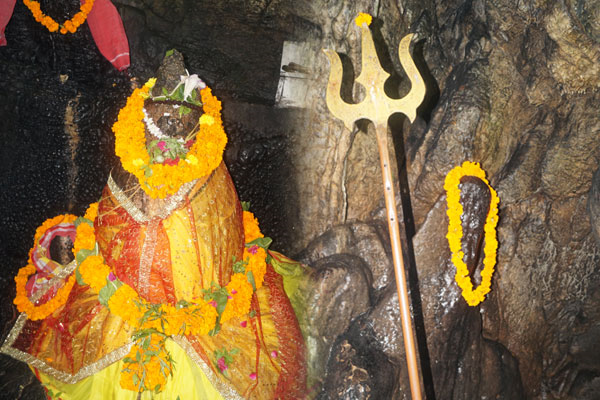 Upon entering the cave, he was awestruck to see many saints offering puja to Lord Shiva. The divine power of Shiva impressed him and he got himself involved in the puja there.
Later, the shepherd disclosed what happened inside the cave to many, much against the promise he made to saints to not reveal about them or this cave to anybody.
The story says that after narrating this incident to others the shepherd met his death. Legends say that many famous saints were closely attached to this cave.
They spent many years inside the cave for meditation and spiritual enlightenment.

By Air
The nearest domestic airport is Jammu and is well connected to all major locations/ cities in the country like Delhi, Chennai, Mumbai, Jaipur, Srinagar etc. From this airport the Holy Cave of Shri Shiv Khori is a 3 hour drive and transport (taxi) is available from the Airport in Jammu.
Most of the major Airlines operate daily from Jammu Airport. The nearest international airport is jammu which is 49 kms from Shri Shiv Khori.
By Train
You can reach either Jammu or Katra by Train. Jammu Tawi Railway Station is approximately 107 kms from Shri Shiv Khori. However all trains also go to Katra and it does reduce the road distance to be covered by the yatries (pilgrims) to reach Shri Shiv khori as compared to Jammu.
Jammu is well connected to other parts of country through railways. A number of trains all over India are available from Jammu. Railway also runs special Trains during summer and other holidays for the comfort of yatries (pilgrims).
By Road
The route from Jammu to Shiv Khori is full of beautiful & picturesque mountains, waterfalls & rivers. Shivkhori is 43 Kms from Reasi, 80 Kms from Katra, 120 Kms from Udhampur, 140 Kms from Jammu and 300 Kms from Amritsar.
Taxies and other vehicles like Van and Tempo Traveler are available from Katra, Udhampur and Jammu. J&K Tourism Development Corporation also runs it fleet of Tourist transport (Cabs, Vans & Mini Bus) to Shri Shivkhori from Jammu as well as Katra on demand basis.
Some private travel operators also provide transport which run on daily basis (even night service to some of the far off locations) that include volvos, deluxe and sleepers connecting various destinations in Northern India
Jammu and Kashmir State Road Transport Corporation as well as adjoining states (Punjab, Himachal Pradesh and Haryana) run transport services on regular basis as well.

Trekking
The walk from Ransoo to Shri Shiv Khori is on a steep mountainous track. Ponies are also available on rent to facilitate pilgrims on the mountainous track. You can be carried upto Shiv Khori by palki as well. Generally the walking takes about couple of hours to visit the Holy Cave and come back.